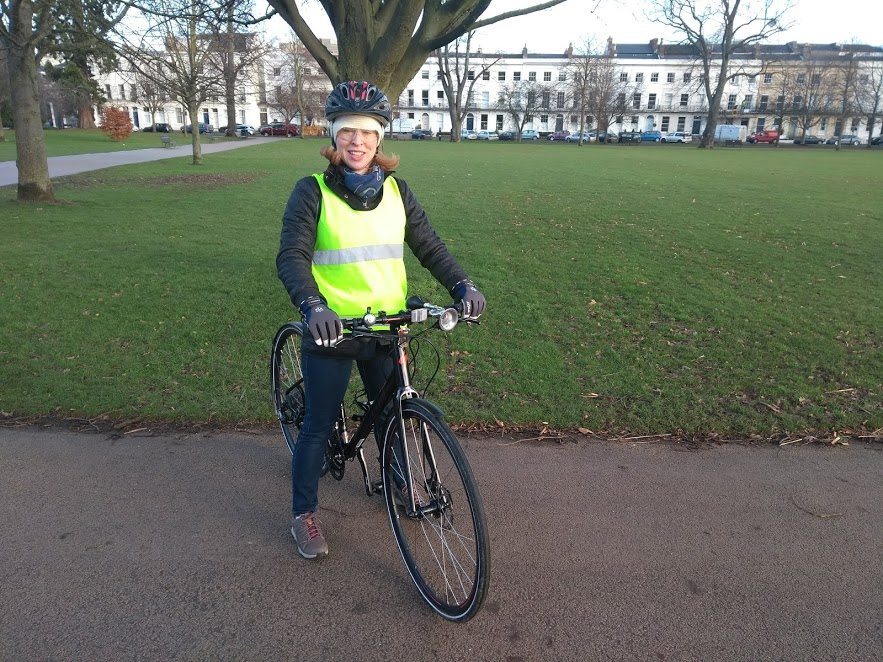 Hello, I’m Clare, I like cycling but I have never gone as far as 62 miles /100 km. This is how far I will cycle on the night of Saturday 26th May 2018 though, it will probably take me 6 hours not including the scheduled breaks. The bike ride is raising money for Women V Cancer – a special fundraising partnership between Breast Cancer Care, Ovarian Cancer Action and Jo’s Cervical Cancer Trust.

This is my fundraising link. Thank you to those who have so kindly made pledges / donations, I really appreciate it. I need to hit my £199 target by 30th March to be able to enter.

I started my prep last year by getting the bike second hand on ebay, and a bit of shopping this January for the right clothes following a 22 mile ride in the Peak District with friends that demonstrated that the clothes I did have were way too heavy and bulky.

Now I have the thermal leggings and the padded shorts, I prefer wearing the shorts over the leggings. I have the merino wicking base layer, a lightweight fleece jacket and a gortex outer jacket. I bought trainers that have lights on the sole for added visibility and sumptuous merino socks. I am testing out the gloves I sell in my new business lovely hands, at the moment its Tegera 292 all the way. Thermal, leather, wind and waterproof. Sizes 6 – 11, £22.50 and just over £1 for postage depending on the final weight. I carry Active gloves with me in case of a puncture.

22 miles in the Peak district in 2 degrees, windy and wind chill conditions with friends – one of whom, Liz, is responsible for getting me into this, having done this ride in 2017. It was up hill and down dale and by the end I was pushing my bike up part of the hills as it seemed quicker and also got the circulation back into my poor toes. Even though Liz and Mark have all the gear they too had cold toes.

16 miles around Cheltenham in 4 degrees with a headwind. My first training ride on my own. It was exhilarating to have planned a good route and to have tried out the clothes and been pleased with them.

26 miles in the countryside around Cheltenham in 4 degrees with Mike, a keen cyclist who knows the ropes. We had a quick visit to Offa’s Chapel in Apperley, and cycled along the Severn for a bit. I slowed him up quite a bit but I think he enjoyed the company! This did knock me for 6 and I ended up having a reviving afternoon bath. 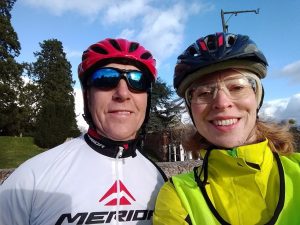 During the month I did 3 spin classes which I was new to. Yoga, pilates and swimming as standard although the swimming is loosing out to the time needed on the bike.

21.5 miles to Winchcombe up the dreaded Prestbury hill, in 4 degrees, my second training ride by myself, I seemed to be going in the opposite direction to 3 cycling groups! Physically I was fine afterwards, I was just zonked out again. I need to build up my stamina for this. I could keep cycling for longer, no problem, I am just zonked out after.

Even though the temperatures are low and there is a wind or wind chill I am warm enough in just 2 layers, the lightweight fleece jacket gets taken off and put in a back pack the minute I feel sweaty which really surprises me. By the 3/4 point of the ride my toes are normally feeling a bit frozen, I might experiment with some pop socks – note to self. By comparison my fingers are all good in the Tegera 292 gloves!

Its funny, but if the weather (rain) stops me going out I get really frustrated. I am psyched up to do this, to build up a bit more ability and stamina each week, and its just a bit addictive! Having said that I did turn down a ride this week as a) it was so cold and I worried about skidding on ice and b) I absolutely had to get in the zone and edit the detail on the website – I would have been too brain dead to have continued after the ride.

Nailtiques - please email me - clare@lovelyhands.co.uk - and let me know which products you are interested in and join a stock update message service. I have listed Orly and Jessica products as alternatives during this out of stock period. Go to 'shop', 'nail care treatments'. Kind regards, Clare. Dismiss